Intervertebral Differential Dynamics Therapy: A New Direction for the Initial Treatment of Low Back Pain

A report by Dennis McClure, MD , and Bethany Farris, MD

Dennis McClure, MD, was in private practice in Dayton, Ohio since 1995. He was certified by the American Board ofNeurological Surgery in 1988 and served in the US Air Forcefrom 1984. He is a lifetime member of the American Associationof Neurological Surgeons. Dr McClure obtained his MD fromIndiana University in 1978 and completed neurosurgery trainingat University Wisconsin Hospitals-Madison in 1984.

There has been no established uniform or conservative management to effectively treat low back pain. Patients with back pain usually present a neurosurgeon or spine specialist with an abnormal magnetic resonance imaging (MRI), while their referring physician tells them they have a degenerated disc causing their pain. Throughout my years of practice, it has become apparent to me that patients with back pain want to know why they are having pain, the cause of their back pain and how to effectively treat their back pain in order to avoid surgery. In addition to improving pain, another goal in treatment is to improve flexibility, as well as quality of life, in the safest and most effective manner prior to recommending more invasive procedures for treating the patient’s pain due to degenerative disc disease. It is a misconception by the public that surgery ‘fixes’ a person’s back pain. If this were true, we would never see patients with failed back syndrome.

In November 2003, I introduced Intervertebral Differential Dynamics (IDD) Therapy to my neurosurgical practice. IDD Therapy® is a noninvasive spinal rehabilitation treatment developed by Norman Shealy MD, PhD, and is delivered by the Accu-SPINA® spinal care device. IDD Therapy provides computer-directed physio-therapeutic treatment to the lumbar and cervical intervertebral discs and facet joints, with a course of treatment consisting of 20 sessions of 25 to 30 minutes, spread over a six-week period. IDD Therapy protocols allow for the controlled distraction of targeted vertebrae to mobilize the joint and to create a negative pressure inside the intervertebral disc.

This negative pressure leads to the diffusion of fluid and nutrients into the disc to stimulate its metabolism and promote hydration and healing. The negative pressure can also lead to the retraction of a herniated nucleus pulposus. IDD Therapy treatment further delivers a passive exercise element to release spasmodic behaviour and to re-educate supporting soft tissues. Since introducing IDD Therapy to the practice I have treated over 1,200 patients. Initial studies of IDD Therapy indicated success rates of 86% and 76% one year post-treatment. Our results of treatment are similar to the initial reports of IDD therapy; in fact, in some cases we believe they are higher.We present our results of over 415 patients who have been analysed so far in looking at success rates that contribute to variables affecting the outcome of IDD Therapy.

After treating patients for two years, it seemed apparent that most of them reported significant recovery of back pain after completing IDD Therapy. This raised several important questions. What are the reasons patients do not improve with IDD Therapy?What factors about these patients led to a good prognosis with treatment? What factors led patients to experience different severity of pain prior to and after treatment? Understanding the answers to these questions was crucial for us to quantify and improve the quality of treatment we could give to our patients. We therefore employed a research analyst to answer these questions and analyses the data extracted from the patients’ files, which included medical history, assessment measures (taken and recorded upon initial evaluation), diagnoses, treatment parameters and follow-up measures.

This preliminary analysis was conducted by analyzing the success from self-reports given by the patient on follow-up. Success with IDD Therapy was rated by patients after treatment (2-4 weeks, and 12 months) (see Table 1). In the preliminary analysis we defined success as an improvement rating of 2 or 3. A patient must report a 50%decrease or greater in pain in order to be considered a success in this analysis. Data from the past 415 patients completing treatment was analysed between two months and two years after completion of the course of IDD Therapy treatment, at an average time of one year post-treatment. Any patient failing to give an improvement rating was excluded. Success rates were examined according to diagnosis assigned prior to treatment (see Table 2).

Of particular interest are lumbar surgical candidates, that is, those patients who had been advised to undergo surgery and who came to the practice for a second opinion or patients who I might have previously operated on. This group showed a success rate of 92%. This is quite an exciting find, considering the next alternative for these patients would have been surgery. Although the sample size for cervical and post-laminectomy patients was limited, the success rates are promising for these groups as well. Having determined initial success rates of treatment led us to inquire about variables influencing the outcome of treatment. In particular, what makes patients have these exciting success rates and more importantly, what variables affect the outcome of treatment for patients who did not benefit from IDD Therapy? We contacted the lumbar surgical candidates for additional follow-up information at 12 months. Out of 129 patients, 84 were contacted. The data for these patients was analysed and the results are as follows:

These results were encouraging and led us to examine other aspects related to pain prior to and after treatment. More specifically, psychological processes and attitudes, and how they may affect IDD Therapy. 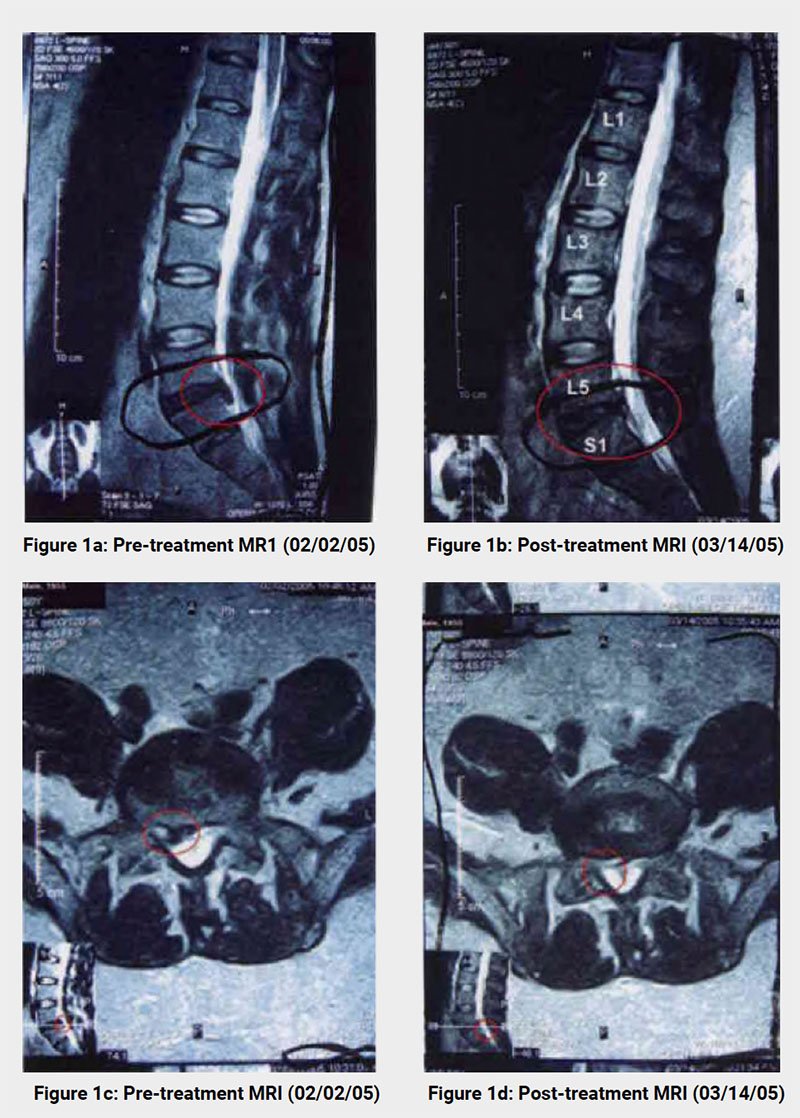 Figure 1 – MRI example
A 50-year-old male with herniated disc at L5-S1. Severe law back pain radiating down into the right leg with straight leg raise of 10° (on the right). Received IDD Therapy in February 2005 and by March 2005 the patient had straight leg raises of 90 degrees and no pain.

DEPRESSION AND ATTITUDE STUDY AND RESULTS

To more accurately assess improvement and factors affecting it, a study was designed to assess patients prior to and post-treatment. Participants gave consent and took a battery of surveys prior to treatment, including a pain assessment, a self-rated depression inventory and an attitude assessment. After patients completed treatment, they took the pain assessment again, and results were analyzed. Analyses are based on a sample size of 50 patients. The first important finding was that patients who reported higher pain prior to treatment showed significantly higher rates of depression, (p<.0071), which gave us important insight into psychological aspects of a patient’s health affecting their perception of pain. Second, patients with negative attitudes (skeptic or cynic) reported slightly higher pain prior to treatment, although not enough to be statistically significant in a one-way analysis of variance (ANOVA). These findings suggest that conceptual treatment of pain should take a more holistic approach.

This study also replicated the effect of age from the previous analysis. Patients in this sample showed that, as age increases, pain after treatment also significantly increased (p<.0110). Number of prescription medications also had a significant effect on the outcome of treatment. Patients taking more medication report significantly higher pain after treatment (p<.0143). Patients on more prescription medications are in overall poorer health prior to treatment. If this holds true, it would also reinforce the idea of treating back pain using a more holistic approach. This would allow us to address and treat additional aspects of patients’ health such as psychological, physical and spiritual areas, resulting in better improvement in pain from IDD Therapy, and overall quality of life.

It is also worth noting that, while different factors may significantly affect the outcome of IDD Therapy, the sample had a significant decrease in pain according to a matched pairs test, (p<.0001). In addition, although depression significantly affected reported pain prior to treatment, patients with depression significantly improved after treatment (p<.0001).This leads me to believe that IDD Therapy not only decreases pain, but also lifts depression associated with pain. Overall, the success rate was 88.2% for this sample, which fell between the ranges of success found in our initial estimates of 79-92% success.

In light of supporting a more holistic approach to pain, we have begun to look at back pain in broader terms than the physical pain our patients experience. We have also started to examine the severity of impairments as a consequence of the pain, and how this affects patients’ daily lives. We began to assess and examine the influence of other factors, such as stress and anger levels, on the outcome of IDD Therapy. So far, 65 patients have participated in this most recent study, called the Anger and Stress Study. The results are preliminary, as most patients have not completed the follow-up portion of this study. Our preliminary findings include:

A number of implications can be made from the analyses above. However, since these are preliminary in nature, we will not elaborate on the potential meaning from each analysis. Instead, we hope to convey information by moving the conception and treatment of back pain in a new direction, one that uses safer, non-invasive treatments such as IDD Therapy for the initial treatment of low back pain, recognising the complexity of our patients and treatment through a more holistic approach.